Western Sydney Wanderers have completed a remarkable fairytale, crowned AFC Champions League winners after surviving an onslaught to draw 0-0 away to Al-Hilal in the second leg of the final on Sunday.

Tomi Juric’s goal in the first leg in Parramatta last weekend proved the difference between the teams, sealing an historic 1-0 aggregate victory for the A-League club.

Tony Popovic’s team barely had a sniff of goal and had to repel wave after wave of attacks at a hostile King Fahd International Stadium in Riyadh.

They needed more than just a stroke of good fortune to emerge unscathed, as referee Yuichi Nishimura turned down appeals for three seemingly certain penalties from the hosts.

Ante Covic was the hero again for the visitors, the Wanderers’ veteran goalkeeper pulling off several important saves, but none more so than a miraculous stop from substitute Yasser Al Qahtani, somehow tipping the Saudi star’s close-range shot around the post with five minutes to go. 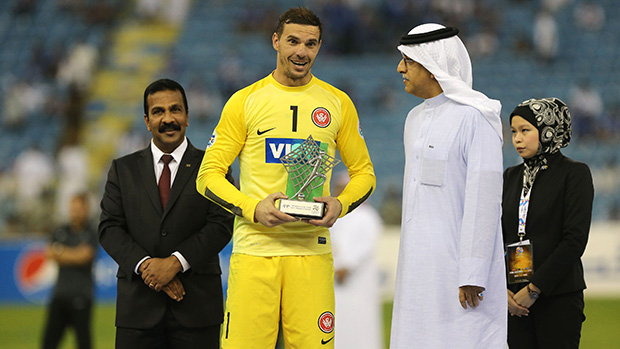 Al-Hilal might have broken Western Sydney’s resistance as early as the 19th minute, centre-back Digao failing to get on the end of Thiago Neves’ free-kick with the goal gaping. That set the tone for a night of frustration as far as the home side were concerned.

Nishimura will need to be smuggled out of the country after he inexplicably failed to award Al-Hilal three stone-wall penalties. The first incident occurred when Anthony Golec brought down Nawaf Al Abid inside the area with a minute to go in the first half.

The ball then struck the raised arm of Brendon Santalab eight minutes into the second half, before Ante Covic felled Salman Al-Faraj in the 65th minute. Extraordinarily, the Japanese referee – heavily criticised for awarding Brazil the softest of spot kicks in the opening match of the 2014 World Cup against Croatia – was unmoved on each occasion.

Back to the drawing board

Laurentiu Reghecampf guaranteed the media and supporters his team would overturn the deficit and lift the trophy in front of their own fans. The Romanian will have some explaining to do after his expensively assembled team dominated possession but failed to find a way past the Wanderers’ defence. The decisions of the Japanese official are likely to feature heavily in that post-match dialogue.

Tony Popovic and his players will return to a hero’s welcome, having gone one better than Adelaide United’s defeat in the 2008 final. Even those supporters from the Sky Blue half of the Harbour City may afford their red and black rivals some grudging respect for their epic achievement, one of the greatest in the history of football in Australia.