Roar dominant once again in Foxtel Y-League Round 5

Brisbane Roar cemented themselves as an early front-runner in the Foxtel Y-League with a 5-1 win over Adelaide United in an entertaining Round 5 clash on the weekend.

It’s the second big win in as many games for the Roar who enjoyed a thumping 4-0 win over Perth Glory the week before, but they weren’t the only team to pick up an impressive win in a round which helped to shape the standings in both Conference A and B.

Catch up on all the action from Round 5 plus the result of Central Coast Mariners’ rescheduled Round 4 clash with Newcastle Jets which went down on Tuesday night.

Newcastle played out two draws in the space of the last four days, the most recent of which coming against the Mariners in a game which ended 2-2 at Pluim Park on Tuesday.

Mariners attacker Alou Kuol opened the scoring from the spot before two goals on either side of half time to Kosta Petratos and Lucas Mauragis swinged the contest into Newcastle’s favour.

Trailing 2-1, the Mariners found an equaliser through Jordan Smylie, who beat a number of players before playing a neat one-two with Kuol and tucking the equaliser away.

It was an entertaining clash which ultimately ended with honours even as the Mariners continued their unbeaten start to the campaign.

Canberra United earned their first point of the Foxtel Y-League season with a 2-2 draw against Conference A leaders Sydney FC at McKellar Park on Sunday afternoon.

Jaiden Kucharski drew scores level for the Sky Blues but before long Canberra snatched the lead back through Luca Florez and took a 2-1 lead into half time.

Marco Tilio pegged United back with an easy tap in from a rebounded Kucharski strike, but United held firm defensively for the remainder of the half to secure a 2-2 draw and a much-needed point.

Victory took just two minutes to break the deadlock when Lleyton Brooks popped up with a phenomenal strike from out wide which was too hot for City goalkeeper Joe Gauci to handle.

Five minutes later, however, Moudi Najjar brought City level but the Victory responded with a neat team move to score through Joshua Varga just before the 20-minute mark.

The game hung in the balance at 2-1 until Brandon Lauton scored from close range to hand the Victory a commanding 3-1 lead which they held until full-time.

The result took the Victory to nine points and to second in Conference B, one point behind leaders Brisbane.

The Roar looked set for another big win early when Jack Hingert drew a foul in the box which Mirza Muratovic stepped up to convert from the penalty spot, but Adelaide were given hope when Lachlan Brook tucked an equaliser smartly into the bottom left corner with 17 minutes played.

From then on, however, it was all Brisbane and George Mells finally broke the deadlock minutes before half time after an extended spell of Roar possession.

The second half started in similar fashion to the first, when Muratovic scored his second goal of the game from the penalty spot, before a goal to Jai Ingham in the 79th minute and a third goal to Muratovic deep into stoppage time took the final score to 5-1.

The result was Brisbane’s second win in as many games after hammering Perth Glory 4-0 the week before. 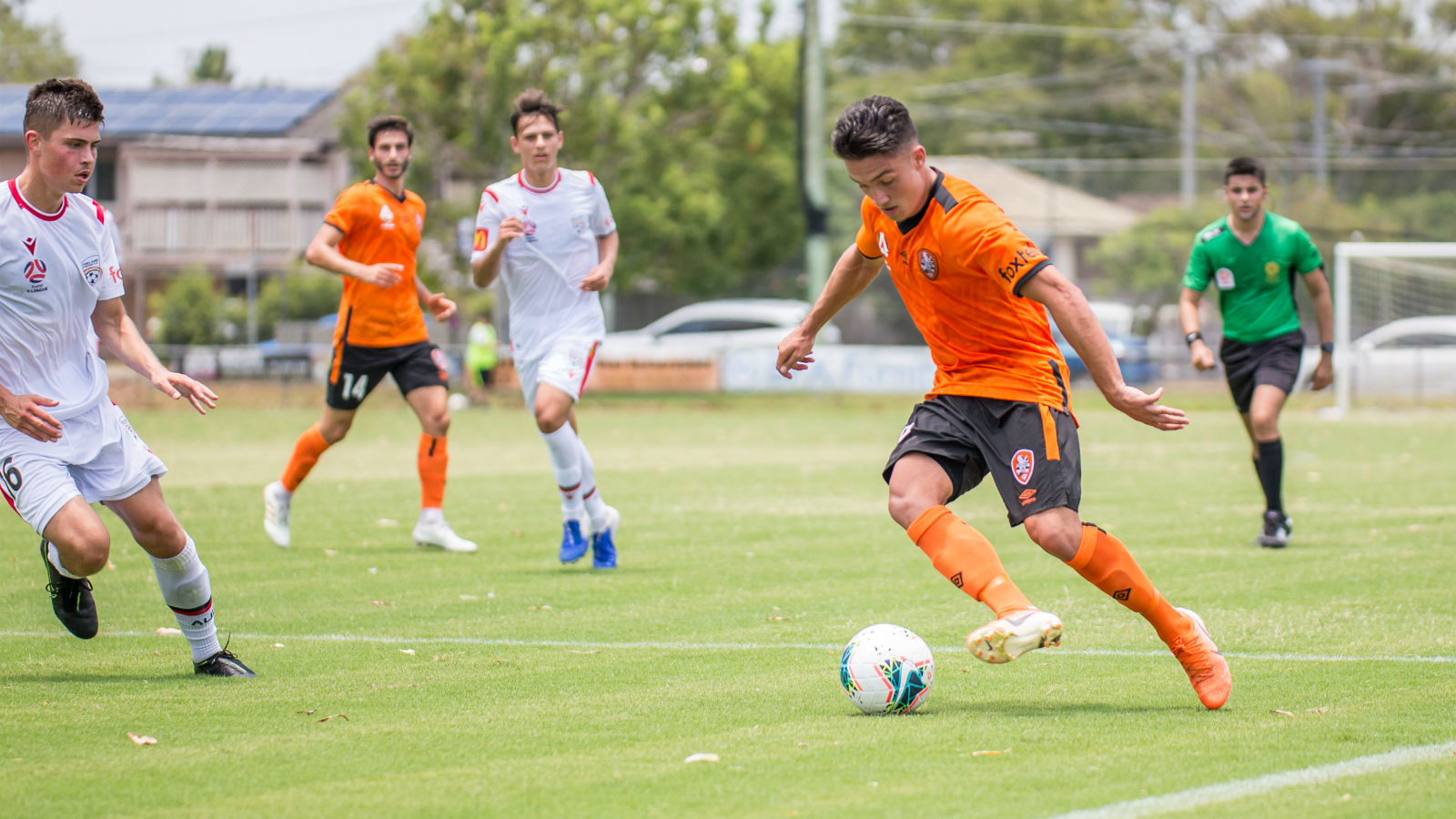 Neither Newcastle Jets or Western Sydney Wanderers could gain the ascendancy in a tightly contested 0-0 draw last Friday night.

Wanderers’ midfielder Lochlan Constable troubled Newcastle goalkeeper Lewis Italiano twice early in the piece while Kosta Petratos and Jack Simmons both went close to scoring for the Jets, with the latter hitting the post from a smart free kick attempt.

Italiano continued to make a number of impressive saves throughout the game, denying Jarrod Carluccio twice on either side of half-time.

The Wanderers continued to pepper Newcastle’s goal with Rory Jordan, Fabian Monge and Jacob Vasilou all enjoying fantastic chances to put their side in the lead.

Newcastle pressed late and Yerasimakis Petratos almost found an unlikely breakthrough but neither Italiano or Wanderers’ goalkeeper Jack Greenwood were to be beaten in an entertaining affair which ended 0-0.