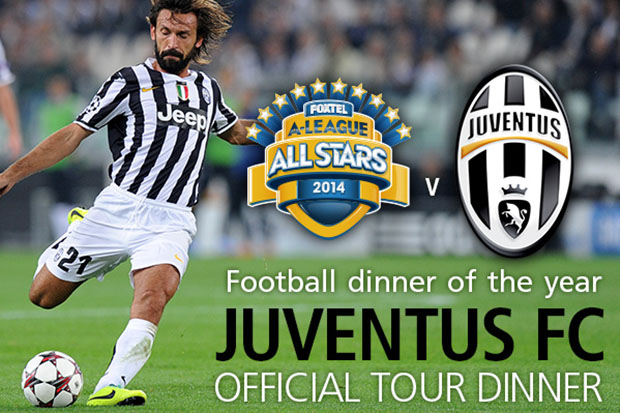 Bookings for the Tour Dinner are now open and places are limited. VIP Seats are $499, Premium Seats are $399 and General Seats are $299, all including an Italian themed three-course dinner prepared by Australia’s top Italian celebrity chefs.

In the historic FOXTEL A-League All Stars match on Sunday 10 August at ANZ Stadium, Alessandro Del Piero will play against his former club Juventus for the first time in his career.

The Sydney FC marquee star spent 19 years at Juventus, captaining them for 11 seasons, scoring a record 290 goals from 705 matches.

Tickets for the match are available at Ticketek. FFA CEO David Gallop said the Official FOXTEL A-League All Stars v Juventus FC Tour Dinner would be a highlight of the Australian football calendar.

“This will be a glittering night for football fans,” said Gallop. “Juventus is likely to have 16 players at the 2014 FIFA World Cup representing eight different nations.

“The FOXTEL A-League All Stars will have their own array of the A-League’s best. The Tour Dinner gives fans a great insight to the world of Juventus and European professional football.”

“The excitement around the Juventus tour is incredible and that will make the Tour Dinner a very special occasion,” said Signorelli.

“Doltone House will ensure that the experience on the night matches the calibre of the world-class players and coaches who are the guests of honor.”

The FOXTEL A-League All Stars v Juventus FC match will be broadcast live and exclusive on the Seven Network.

For inquiries and early bird bookings call Antonella Catalanotto at Doltone House on (02) 8571 0631 or by email: antonella.catalanotto@doltonehouse.com.au