The announcement was made exclusively on Seven Nightly News.

FFA CEO David Gallop was excited by the announcement of the first group of players, which were voted on by the fans, to join Coach Josep Gombau’s squad that will take on Italian Serie A champions Juventus at ANZ Stadium on Sunday 10 August 2014.

“Following the success of last year’s Foxtel A-League All Stars match, the sense of excitement and expectation for this year’s match against one of the biggest clubs in world football, Juventus, is palpable,” said FFA CEO David Gallop.

“The match will showcase the best talent from the Hyundai A-League against truly world class opposition with 12 players from the Juventus squad appearing at the 2014 FIFA World Cup.

“I’m sure that fans will get behind this group of players in the Foxtel A-League All Stars squad for this once in a lifetime event.”

Central Coast Mariners defender and New Zealand International, Storm Roux, receives his first call-up to the Foxtel A-League All Stars squad after a stellar Hyundai A-League 2013/14 Season, while for Rose, this is his second selection after he lined up in the inaugural match against Manchester United last year.

“It’s fantastic. I think last year when I made it I said it’s a great reward for all of the hard work, and same again this year – it’s something to look forward to and something that I’ll remember forever,” Rose said.

“It’s a great opportunity for the A-League guys, a chance to enjoy the experience and test ourselves against world class opponents.”

Sydney FC central defender Sasa Ognenovski helped to sure up the Sky Blues defence following his arrival at the club in February this year. The imposing figure has made 22 appearances for the Socceroos and was named the AFC Asian Player of the year in 2010, and he is looking forward to the challenge of facing Juventus’ best.

“You always want to play against the best teams and the best players in the world, and it will be a good test against Juventus,” Ognenovski said. 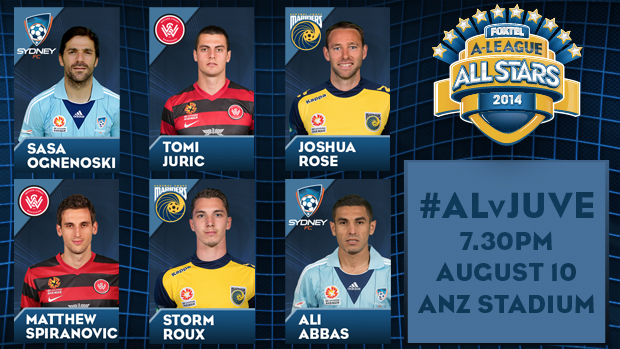 Western Sydney Wanderers central defender Matthew Spiranovic has had the perfect preparation for the match after starting in all three of the Socceroos matches at the 2014 FIFA World Cup, his selection for the national team coming thanks to a standout season for the red and black.

Fellow Wanderer, 22 year-old striker Tom Juric, has had a meteoric rise since joining the Hyundai A-League last year, leading to a debut for the Socceroos. Now, the chance to possibly lead the line against Juventus is certain to be another significant achievement in his short career thus far.

“I’m very excited and feel privileged about being selected in the squad to take on Juventus in my home city.”

The remaining fan voted players in the Foxtel A-League All Stars 2014 squad will be announced throughout this week as well as Head Coach Josep Gombau’s four (4) wild card picks.

The Foxtel A-League All Stars will meet Juventus at ANZ Stadium in Sydney on 10 August with the match to be broadcast live and exclusive on the Seven Network nationally.

For all the news on the Foxtel A-League All Stars, visit www.a-leagueallstars.com.au