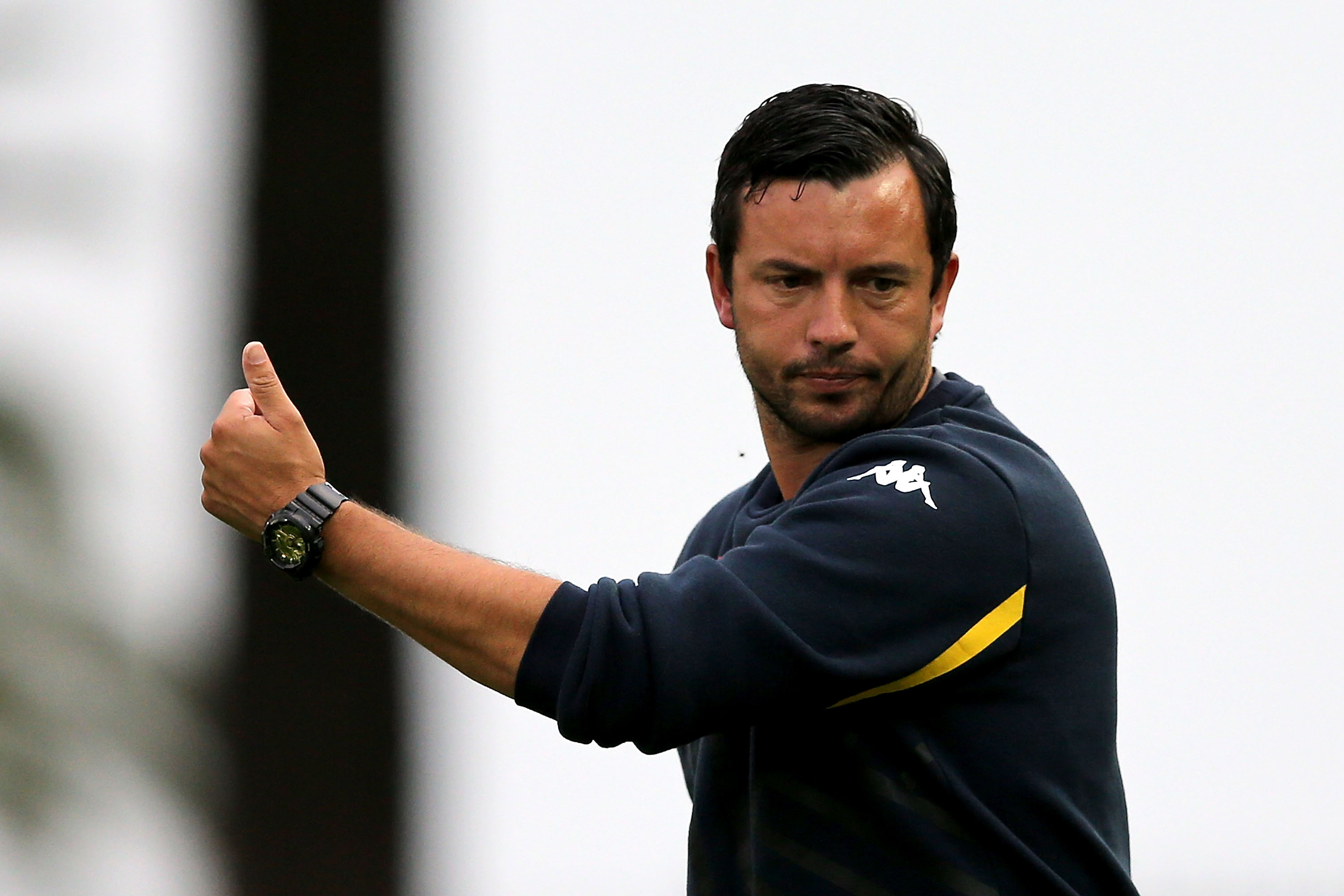 Football can take us all kinds of places around the globe and John Hutchinson is about to embark on his own unique journey.

The Central Coast Mariners great will be based deep in the heart of Texas, taking on the dual role of head coach and technical director at USL outfit El Paso Locomotive.

El Paso provides a special experience and backdrop, standing on the Rio Grande across the United States-Mexico border from Ciudad Juarez, which was once known as the most dangerous place – statistically – on earth.

It encapsulates the best of both US and Mexican worlds, with a strong Hispanic culture, and coming from the community-rich Gosford area, A-Leagues legend Hutchinson is relishing the opportunity to embrace what makes El Paso so distinctive.

Hutchinson, who is no stranger to US football after two separate spells within the Seattle Sounders setup, told KEEPUP: “Something I did on the Central Coast as a player and a coach is embrace the community. It’s something I’m big on. Coming to El Paso, I can’t wait to get involved in the community. We’re going to make strides. We want to grow those areas.

“Funny story, I’m trying to buy a car from El Paso while I’m in Australia. My wife takes care of that, and she’s found a car and gone to buy it.

“(They’re) season-ticket holders of El Paso and they put two and two together and now we’re all of a sudden invited to dinner. I like that stuff. I want to be part of the community. As a pro athlete or coach, you have a responsibility to that community. It’s something we need to embrace.”

Locomotive are a club still in their infancy but they have already made an impact in the USL Championship, a tier below MLS in the United States.

The latest Australian coach flying the flag abroad, Hutchinson is hoping to utilise his experience as an assistant to Ange Postecoglou at J1 League side Yokohama F.Marinos in his first foray into management.

“I always wanted to become a manager,” said Hutchinson, who also previously worked as an assistant at Isuzu UTE A-League club Western United in 2019.

“When Ange left for Celtic and nothing eventuated from there, my mind and heart was set on becoming a manager. I wanted to find a club that want to win and grow in all areas. I had opportunities to stay in Japan as an assistant but I just felt like it was time to become my own manager. I actually really enjoy coaching abroad.

“The initial convos, it really interested me and something I pushed for. What I want to create is a new vision and way of playing. They played good football previously but I want to improve and grow that.

“As everyone would tell you with Ange, I’ve had seven months of my football life ever.

“I always describe it as a jigsaw puzzle – holes are missing and you need to add pieces in. Working with Ange, those pieces were flying in. There’s always holes and you want to keep developing as a coach. No point saying you’re complete and this is how you’re going to play for the rest of your life, that’s not how football works. It’s organic and changes all the time.

“When I spoke to El Paso, it was something left-field and something I was really interested in. The club are really professional, on and off the field. They have their own training facility, two fields, play at a beautiful stadium. It’s first time really jumping into a proper manager’s position where you’re controlling budgets, signings, talking to agents, staff etc. It’s been a really good process staff. This is hopefully the start of a big stepping stone in my career where I can take the club forward and move forward myself.”

The impact of Postecoglou on Hutchinson’s career is not lost on the 42-year-old Australian, who was brought to Yokohama by Postecoglou last year, as the Celtic boss fuels his new football chapter.

Hutchinson rediscovered his love for football and credits Postecoglou for giving him a new lease of life before the Australian trailblazer swapped Yokohama for Glasgow as another Aussie replaced him at F.Marinos – Kevin Muscat.

At a crossroads amid the COVID-19 pandemic in 2020, Hutchinson recalled: “I was in Seattle when COVID hit and I didn’t know who to reach out to. I was really struggling, I didn’t know whether to stay or go. It’s easy to come home.

“I actually jumped on LinkedIn and sent Ange Postecoglou a message, pretty much saying ‘hey, I’m struggling’, not expecting a reply. That night I received a really nice message back from him. I didn’t know the guy, I’d said hello once to him before. He sends me this message of hang in there etc. I woke up in the morning with renewed energy. A few months later he contacted me about a position opening. We spoke for an hour and I literally accepted on the spot. Didn’t know anything, finances or anything. Literally told my wife: who turns down the chance to work with Ange?

“I obviously got stuck in Australia with COVID, ran a pre-season via Zoom.

“Shaun Ontong, (he is) incredible. He says to me (he) learnt off me but it’s the other way around. Incredible human and football knowledge.

“A guy Australia needs to harness because he has a huge future. He thinks a bit different to what I’m used to, and that challenged me.

“That first week in Japan I didn’t sleep. The intensity of training, it blew me apart. I’d never seen anything like it. I know Japanese players are really good but these guys were really, really good.

“All of a sudden I’m in this environment that is challenging and difficult. When I felt like ‘okay I’m in and I’ve got it’, you don’t have anything because Ange would re-challenge you. There would be more and more. There was no time where I felt we had this. Every stage we needed more and more to challenge the players and our staff.

“I know Pete Cklamovski (now in charge of Montedio Yamagata in J2 League) and Arthur Papas (Newcastle Jets head coach) were there. They built this training culture, which Ange is the main component to, but it’s the best training culture I’ve ever been involved in from a player or coaching point of view.

“The learning aspect; I remember waking up one morning and I sent through the training program the night before for the session and waking up in a rush, jumping out of bed because I made a mistake. I’m awake at 3 in the morning changing the plan and apologising.

“The guy cares. People want to win everywhere but the will to win for him and the way he sees football… people say it’s like a diploma in football working with him, but it’s much more than that.

“I’ve had some amazing coaches – Frank Arok, Graham Arnold but Ange, I can’t describe exactly what it was like but it was the most accelerating and stressful time in football. Just the love of the game. I thought I loved the game. He used to say it’s not a job and I take that on board. I wake up thinking football and go to bed thinking football. What else do you want?

“He doesn’t say much. There could be days where I’m greeting him in the morning and not saying much at all. But the nurture, leadership and love for the players, even his distance in the way he works, you feel it.

“All the players know everyday counts, every minute. How you turn up and present yourself, to training, games and video, everything counts. It was lifechanging. I always had a philosophy of possession and attacking football but it’s completely changed and gone to another level. He helped me grow that…

“When he was going to Celtic I saw a couple of comments, like some guy on radio laughing and saying: who is this guy? I was laughing because I was like: you don’t know who you have coming to your club.

“Here is our guy, who everybody in Australia and Asia should get behind and back because he is changing the game for us. He has the weight of Australia and Asia on his shoulders right now. We need him to do well because as a coach, I want avenues open.

“I would never have coached in Japan as a head coach unless it was Ange. That is where everyone should be backing him. He has this unwavering willing ability.”